Two of my favorite milk substitutes are coconut milk and cashew milk. I love the texture, the creaminess and the mild flavor. Almond milk has a similar texture, but definitely has a more defined and nutty flavor, as well as being more off-white or tan in color. Below I will go into the types of milk that I have tried and how I generally use them. I’m also going to post a disclaimer here as well: Although I am partial to a particular brand of milk, I am not at this time, paid to endorse any one.

If you’re watching your sugar intake, it is important to note that a lot of brands do contain added sugar, but most brands have an unsweetened option. Also there are some additives and preservatives like carrageenan and guar gum in some of the milks that people may find undesirable, but there are brands that have little to no extras in them.

There are a couple of different types of coconut milk, as well as various brands. Coconut milk comes from the meat of the coconut. The liquid in the middle of the coconut is coconut water and while it’s delicious and full of potassium, I don’t personally cook or bake with it (although I love it instead of Gatorade!).

There is a distinct taste difference between canned coconut milk and the stuff you will find in a carton in the refrigerator section (or also shelf-stable cartons) in your grocery store. The refrigerated stuff does NOT have a distinct coconut taste. For those with coconut-phobias, rest easy, putting this in your banana bread will not make it taste like coconuts. There are some almond-coconut or almond-cashew blends that are very delicious.

I was using coconut milk in my baking cup-for-cup for regular milk before I even went dairy-free. I enjoy coconut milk that much. I had a lot of success baking with it, and it makes a great latte! You can also substitute for buttermilk by adding a little lemon juice or vinegar to your coconut milk.

The coconut milk in the can is usually much more coconutty. It usually comes in a full-fat version and a reduced fat version, the latter of which is usually cheaper. Be aware that the reduced fat coconut milk, is just watered down. A person can make dairy-free whipped cream from a refrigerated can of full-fat coconut milk (just like you would make whipped cream from heavy cream and not skim milk), although I personally haven’t successfully accomplished this yet. I’ll let you know!

Coconut cream comes from the meat of the coconut like the milk, but the liquid is reduced and you get a really heavy coconut flavor from coconut cream. This is great for curries or soups where a strong coconut flavor is desirable.

If there is a nut out there, it can be made into milk! You can literally choose anything, which is nice for people with allergies to specific types of nuts, but not others. All you need to make your own milk is a nut milk bag or cheesecloth, a blender, and raw nuts.

Check out this thorough tutorial from Tasty Yummies: http://tasty-yummies.com/how-to-make-nut-milk/

There are also several commercially made nut milks available for purchase in quart or half gallon jugs. Here are some that I’ve seen just to name a few! 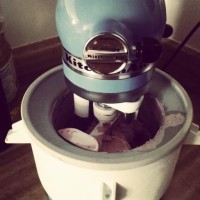 A site about rural living with gluten and dairy allergies